Durant Cricket was delighted to support a recent cricket pitch renovation seminar at St Albans School, in Hertfordshire organised by Dennis and SISIS Equipment. Mark Illott former Essex and England Cricketer and St Albans School Cricket Professional opened proceedings, in the morning, speaking briefly about the wonderful sporting facilities at the school. Following that, there … END_OF_DOCUMENT_TOKEN_TO_BE_REPLACED 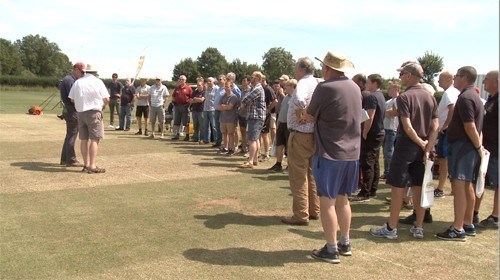 Following that, there were a series of talks from top turf consultants and professionals for the assembled 133 club and school groundsmen during the morning session.

Alex Vickers (Turf Consultant) spoke about the decision making process for autumn renovations and profile reading whilst Rob Kendle (ATB Sports Solutions) showed his expertise as a contractor on end of season renovations. Following on from that there was Soil Core clinic where the groundsmen presented their soil core samples to the panel of experts for analysis and discussion.

The day also gave Durant Cricket the opportunity to exhibit one of its latest innovative products – the Module Cover which received a number of enquiries from interested groundsman that attended the seminar.

Flicx UK are delighted to roll out a new product for the 2017/2018 season, the 2G Flicx Multi-Aged-Pitch (MAP) which will be retailed exclusively through Durant Cricket. The MAP pitch is specifically aimed at schools and clubs who need a match pitch that can cater for different age groups. With this new product coaches can … END_OF_DOCUMENT_TOKEN_TO_BE_REPLACED 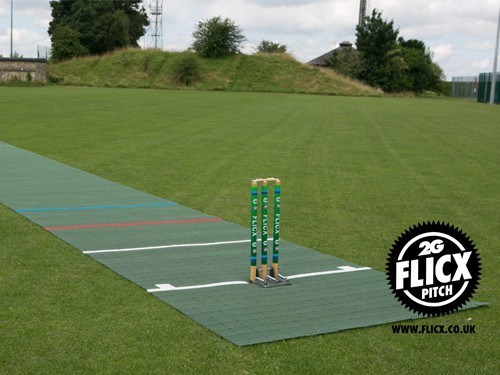 Flicx UK are delighted to roll out a new product for the 2017/2018 season, the 2G Flicx Multi-Aged-Pitch (MAP) which will be retailed exclusively through Durant Cricket. The MAP pitch is specifically aimed at schools and clubs who need a match pitch that can cater for different age groups. With this new product coaches can move the stumps according to the colour coded creases demarcated for the various age groups to change the pitch size from 20.12m to 18.12m or even 16.12m depending on which team is playing or practising. The MAP pitch also has an additional 1m section behind both sets of wickets, this is of great benefit to bowlers who are now on the pitch in their delivery stride.

Feedback is suggesting that the 2G Flicx MAP pitch will solve capacity issues for clubs and you have the value derived from only purchasing one pitch for all your age groups. Versatility is the key point here and our 2G Flicx Pitch can be roll out on grass, astro, concrete, beaches or pretty much any firm, flat surface to convert it into a cricketing venue. The new 2G tile also performs very well indoors and with each pitch coming in two rolls, your 2G Flicx Pitch can also be easily zipped apart to create 2 batting ends for the nets or Kwik cricket on your outfield, again increasing your capacity.

Speaking about the new pitch, Flicx UK’s business development manager Ashley Appleby commented “This new product is really going to tick a lot of boxes for many clubs and schools. It gives you even more versatility than ever before to use your pitch for multiple age groups without any additional preparation time. Time and cost savings will help cricket masters and coaches, spend more time developing their player’s skills so that can only be a good thing”

If your club / school is interested in learning more about the 2G Flicx MAP, contact Durant on 01572 822 013 where they can provide further information on its suitability for your club or potentially arrange a demonstration or sale.

Cristian Durant founded Durant Cricket in 2007. After playing county cricket between 1996 and 2001, he wanted to stay in the game in some way.

“I got to about 25/26 and realised I had to get a job like everyone else, but carried on playing club cricket after that at all sorts of levels, right down the bottom up to premier league and minor county level,” he explains.

Cristian still plays at club level and is heavily involved in managing his local club and that helps him assess what clubs need.

“We’ve got our own issues and things we need to improve on and it gives good insight into the day to day challenges.

“It’s alright saying ‘you know about this and know about that’ but actually sitting in those meetings asking ‘How are we going to do this or that?’ gives me a good insight into how cricket clubs work.”

Durant has used that experience to help him build the company to a point where we now supply clubs all over the UK and have partnerships with county boards, the ECB and other leading organisations.

“What I’ve found is because I’ve experienced all those different levels of cricket it gives you a real appreciation for what it’s like at the top, and how it’s laid out for you, then you come down to the bottom and it’s putting your own stumps out and pulling the boundary rope around.

“I like to think i have a fairly well balanced, well rounded view of where the club game is which does give me a really good idea as I’m going round.

“I’m visiting clubs in similar scenarios with top premier league clubs like big businesses and some of your real grass roots club with the village mentality and improving things from that end – I like to think we have a good idea of where we are.”

“On the website we’ve got some very good information videos, as well as some videos on how the products go together which gives some people some really good information on what they should do at the end of the season and also gives them a good idea before they buy of what they’re actually buying,” Cristian says.

“We’ve got some Google maps on there, so you can actually click on the scoreboards and covers and find out where we’ve installed hundreds of products over the years.

“So if you wanted to you could ring somebody at another club or nip down there and have a look, and actually see what you’re going to buy really, which we think is quite important.

“There is a lot out there, if you were charged with buying some covers and didn’t know anything about them it would be quite a daunting process.

“We’re just trying to make that easier for everybody.”