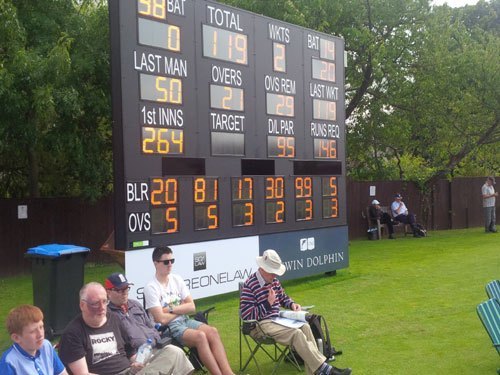 In terms of cricket experience, the team at Durant Cricket have plenty of that thanks to their own playing experience and the hundreds of clubs they visit on a regular basis.

Time and again when they visit clubs they are struck by the realization that without volunteers giving up their time and energy, recreational cricket would really struggle to keep going.

So often, the person (or people) responsible for looking after the pitch and grounds at your local club is an ‘unsung hero’. Durant Cricket are committed to doing everything they can to support and reward these people, including sponsoring awards that recognize their contributions.

“We support quite a few things, with Cricket World, looking at the groundcare section you have some groundcare heroes there,” Cristian Durant, company founder, explained.

The response to Cricket World’s first season of inviting nominations for club and ground heroes was incredible, which pleased Durant greatly.

“It’s great to see so many clubs writing in and giving good stories about the guys that help out on the grounds – there are some really passionate people who don’t get, or probably don’t want, as much exposure as they should do.

“Without those guys there really wouldn’t be any cricket – coaches running sessions is great but the guy that’s down there on a Monday morning brushing the wicket off and getting it ready for juniors on a Monday or Tuesday night is a real hero of the club.”

Their efforts are hugely important, and Durant hopes that they can inspire the next generation so they are ready to take over and keep club cricket thriving.

“From a personal point of view, what we do without those guys when they get a bit older and decide not to do it I’m not sure.

“It really is something we should look to encourage and give them a lot of credit for what they do.

“We keep talking about dropout rates in cricket but the area of grounds is really something that has to be looked at.”

As most of us seem to have less and less free time on our hands, Durant feels those that are working hard for their clubs deserve special praise.

“People have less time these days admittedly. It does take time, you can’t buy that – you need somebody that is down there on a Monday and Tuesday morning tidying up the ground.

“We all take that person for granted and don’t realize the amount of time and effort they put in.

“I think it’s important we say thank you, they aren’t the kid of people that want their name up in lights, just an appreciation of what they do goes a long way.”