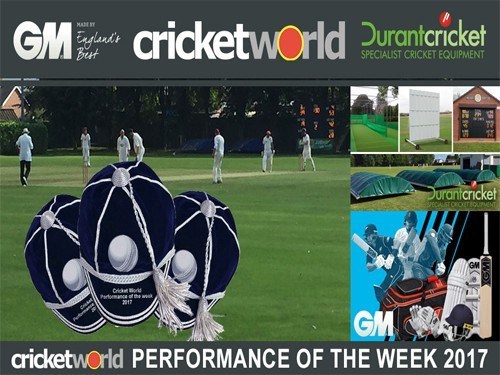 As the 2017 cricket season gets underway, we are delighted to announce that Durant Cricket is a partner sponsor of the 2017 Cricket World Performance of the Week along with GM Cricket.

Cristian Durant, Managing Director of Durant Cricket commented: “We are delighted to be involved with this grass roots initiative, which encourages and rewards amateur and junior cricketers for their outstanding performances. As a Company, Durant Cricket is very much involved with club and school cricket, around the UK and Ireland, and we are very happy to be putting something back into this area. We look forward to being actively involved in promoting this through our website and social media channels and seeing all the great performances coming through during the season”

Now in its 5th year, the Cricket World Performances of the Week have registered over 2000 top performances, reaching more than 3000 clubs and schools every week, with the best action from around grass roots cricket in the UK and Ireland.

New for 2017 is that all the top performances featured in the unique weekly “Vote Off” ,which are captured through Cricket World’s social media and direct messaging tools, will be accredited with a fabulous downloadable Certificate as a record of their achievement and, this year, a weekly Junior Performance Winner (U18) will receive a special memento and Honours cap (supplied by Gentlemen and Players) and the chance of being selected to attend a special GM Cricket Experience Day, in association with Durant Cricket, in Nottingham.

Any senior winners will also receive a special memento of their achievement. (The Editorial panel is aware that there are a number of ex-professional and current pro-cricketers in the Leagues and their decisions on the winners are weighted towards the ‘non-professional’ club cricketers’ performances and their decisions are final. No correspondence will be entered into).

Good Luck for the 2017 season and look out for some special Durant Cricket offers!