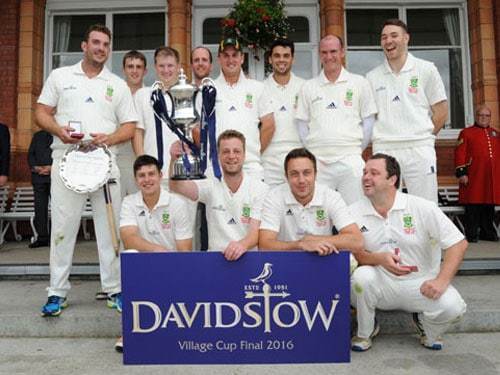 Simon Mason produced a performance Viv Richards would have been proud of to power Sessay to 2016 Davidstow Village Cup glory at Lord’s.

It was 37 summers ago that Richards smashed 138 not out here in the World Cup final; Mason matched that score as his North Yorkshire side ensured the trophy stayed in the white-rose county.

It was the highest individual score in any of the 45 Village Cup finals, beating Kevin Iles’ extraordinary 123, for Goatacre against Dunstall in 1990; and it came in a record total for the final, 307 for 5, overtaking 267 for 5 by Goatacre that year.

First-time finalists Sibton Park, from Kent, tried their best, but fell 119 shy, despite a brutal 70 from Ben Allon.

“We are absolutely delighted,” said Sessay skipper Mark Wilkie. “Eight of the side who won in 2010 were back here, and we worked so hard to reach the final. MCC, The Cricketer and the sponsors have given us a great day. Simon’s innings was such quality, just what we needed.”

Last year’s winners Woodhouse Grange were not allowed to defend their title, but 300 teams from 32 regions entered the race at the start of May, and it took eight matches to reach Lord’s.

Sessay were favourites, but Sibton Park were certainly made of the right stuff after squeezing through previous rounds by slender margins of one, six and nine runs.

It was a brutal knock by Mason. He is teased by his team-mates for the number of throw-downs he demands, but that practice paid off as he hammered 19 fours and three sixes in his 110-ball knock.

He was bullish from the off. Sibton Park opened with slow left-armer Trevor ‘Tidy’ Lewis, but Mason thumped him over the top twice.

Once the accurate Steve Rowe took his sweater after a decent opening spell, Mason scored freely. A combination of nerves and perhaps the Lord’s slope saw the Kent side’s support bowlers struggle. It was an especially disappointing bowling display by Allon, who had taken 20 wickets at nine apiece on the way to the final.

Mason received tremendous support from Nick Harrison, who made 69, with 10 fours and two sixes. They combined for a stand of 156, with the first 100 coming off only 91. Late pyrotechnics were also provided by Jacob Spencer, who struck three sixes in his unbeaten 48.

It had started quite well for Sibton Park, who removed both openers, including Wilkie relatively cheaply.

Sessay made early strikes to reduce Sibton Park to 55 for 5, and it was always going to bedifficult from there. Stuart Peirse used the Lord’s slop nicely for an accurate, wily spell, taking 3 for 21. In the 2010 final he had fallen over bowling his first ball; this time he was on the money straightaway.

Wilkie, who was on the Lord’s groundstaff with New Zealand’s Ross Taylor, also struck twice. Allon targeted him then, however, hitting four successive sixes.

All his seven sixes took advantage of the short legside boundary into the Mound and Tavern Stands; but with 150 needed off 13 overs the ask became too much and he was caught and bowled by Matt Till. His team-mates say Allon is “the loudest human being ever”, and at least his batting gave him something to shout about.

After that the end was relatively swift, with Till finishing with three wickets.

It is the 10th time a Yorkshire side have triumphed in the Village Cup; Glamorgan are the closest challenging county, with five.